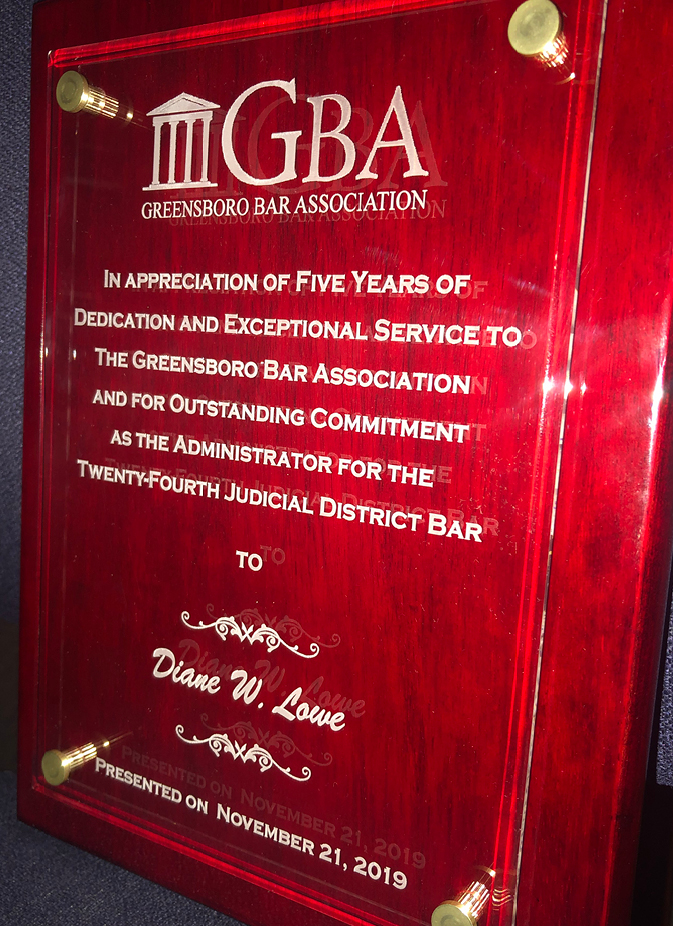 Diane Lowe receives award in appreciation of five years of dedication and exceptional service to the Greensboro Bar Association and for outstanding commitment as the Administrator for the Twenty-Fourth Judicial District Bar.

Diane Lowe was recognized for her dedication and commitment to the standard of excellence she has demonstrated to the Greensboro Bar Association.  Immediate Past President Judge Vincent recognized Diane at the November GBA lunch membership meeting.

As Judge Vincent remarked, Diane Lowe is “the most valuable asset to our organization” ––– thus, “give honor to whom honor is due.”  Judge Vincent noted that the honoree is gifted in the logistics that are necessary for people to have a seamless experience.  Indeed, Diane has gone above and beyond consistently to ensure the GBA members have an outstanding experience.

Diane Lowe has served as the GBA Administrator since 2014.  Ms. Lowe graduated from the State University of New York College at Fredonia in New York.  She served as the Membership Director of the Greensboro City Club from 1995 to 1997.  Diane owned Personal Jewelers of Greensboro, a high-end jewelry shop, from 1997 to 2001.  From 2002 to 2014, Diane also contributed greatly to the success of Kids Voting where she worked diligently to improve donor relations, recruit volunteers, and oversee budgeting and financial reporting.

Message from the President, December 2019