Effective Monday, March 16th, we will not be holding court unless there is an emergency situation for Superior Court Civil matters in Guilford County. Therefore, all matters, trials and motions, currently scheduled to be heard from Monday, March 16th through Monday, April 13th in Superior Court will be postponed.  If you believe your matter falls under an emergency circumstance, such as requesting a Civil Temporary Restraining Order, please contact Brittany Robinson (Greensboro) at Brittany R. Robinson or Wendy Stuart (High Point) Wendy J. Stuart for direction and scheduling concerns.

Attention:  Attorneys who currently have motions scheduled during this time period will need to reschedule those motions once a definitive reopening of the Courts is confirmed.

Thank you in advance for your attention to this matter and for your cooperation/patience during this time as we work through the next few weeks on rescheduling matters in Guilford County Superior Court.

In light of statements issued by Governor Cooper and Chief Justice Beasley regarding the coronavirus outbreak, we found it prudent to cancel the member meeting scheduled for Thursday. We will evaluate our ability to reschedule this event in the future. 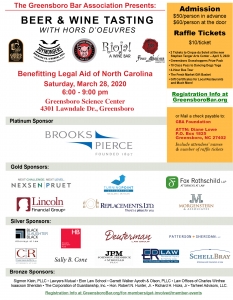 The 2019 Centennial Award for outstanding and exemplary community service was presented to Margaret R. Kantlehner at the GBA member meeting on February 20, 2020.

Margaret has served the Greensboro Bar Association in a wide array of leadership roles that include Newsletter Editor, 4ALL Attorney Volunteer, and BarCARES Volunteer, and served as the Elon Law School Liaison to our Board of Directors for over 10 years.

It has been said that Margaret loves to pull from many different places to help people with their problems. Seeing various opportunities to meet a need in the community, Margaret has shared her talents with the Corporation of Guardianship. For years, she built houses, organized food for volunteers, and helped with pro bono loan closings for Habitat for Humanity of Greater Greensboro. She used her love of art and became an officer and then president of the Board of Directors at UNCG’s Weatherspoon Art Museum. She helped lead Greensboro Bound and has helped organize the annual Greensboro Literary Festival. She worked to engage law students in community leadership by co-creating and leading the Elon Law School Preceptor program for almost a decade. These, however, are merely the highlights, as the list of organizations to which she has contributed is long.

We are pleased to recognize Margaret Kantlehner for her dedicated service to the community and her commitment to making this world a better place for all.

The Herb Falk Society was established to honor those members of the Greensboro Bar Association who contribute at least 75 hours of pro bono service each calendar year. The deadline for reporting pro bono work done in 2019 is February 15, 2020. The reporting has been simplified in recent years. Complete and mail this Mail-in Report Form to the GBA office. This year, you can also report your hours online! Fill out the HFS Online Report Form for as many pro bono activities you completed in 2019.

To assist in tracking your 2020 pro bono hours, please use this Template Spreadsheet to keep up with all of the work and contributions you make in 2020.

The Greensboro Bar Association established the Distinguished Service Award in 1993 to annually recognize a lawyer for exhibiting a deep devotion to the legal profession and an enduring contribution to the administration of justice and the public good through unselfish service. The recipient for 2018-19 is Joseph A. Williams.

Attorney Joseph “Joe” Williams of Joseph A. Williams, P.A. is a trial lawyer, practicing with his own firm in Greensboro.  Joe graduated from North Carolina Agricultural &Technical State University (NCAT) in 1972 and North Carolina Central University (NCCU) School of Law in 1975. 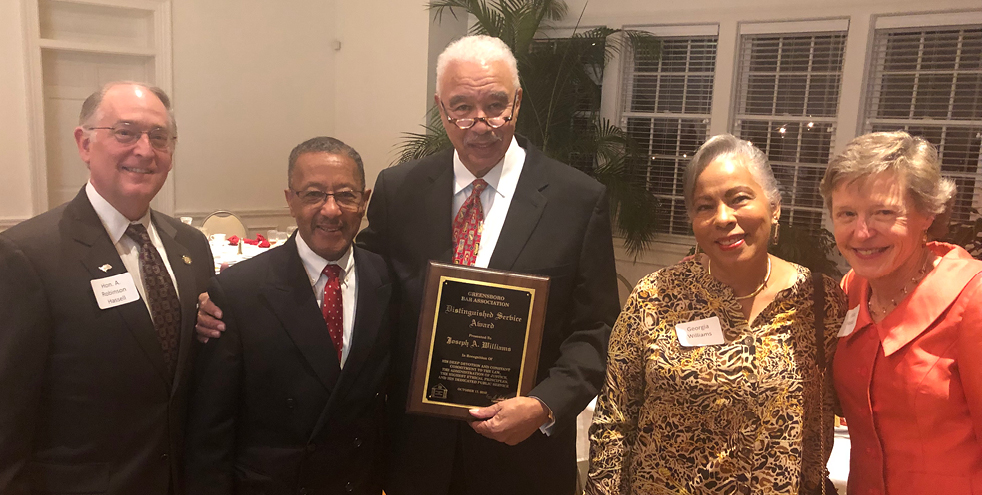 Joe currently serves on the Board of Directors for First Citizens Bank and is Community Coordinator for the Greensboro Violent Offenders Task Force. He is a member of the American Bar Association, Greensboro Criminal Defense Lawyers Association, North Carolina Association of Black Lawyers, Omega Psi Phi Fraternity, Greensboro Young Men’s Club, and NC Guardsmen, Inc.  His numerous academic publications include “A Crow-Jim, the Saga of Inverse Discriminations,” among others.

Joe has received various awards and accolades throughout his life including: the American Juris Prudence Award of Academic Excellence in Health Law; the Law Week Award for Scholastic Achievement in Senior Year; the Order of the Long Leaf Pine State of North Carolina awarded by Governor James B. Hunt, Jr.; the NC Association of Black Lawyers Community Service Award; the Greensboro Young Men’s Club Man of the Year; and most recently the Lifetime Community Service Award from the International Civil Rights Center & Museum.

The North Carolina State Bar is hosting an Opioid Summit on Friday, October 4, 2019 at the State Bar building in Raleigh, NC.  Attendees will hear from leading experts and practicing lawyers about the opioid epidemic in North Carolina and how it affects the legal profession. In this day-long CLE, attendees will hear from experts on the State’s response to the epidemic, the science of opioid use, and the implementation of recovery courts, while also hearing individual stories from lawyers about the disease’s impact on family members and clients.  The program is bookended by a morning keynote address from Attorney General Josh Stein and an afternoon panel discussion with practicing lawyers offering practical guidance.  Details about the summit are included below:

What: Broadcast of the North Carolina State Bar Opioid Summit

Cost: $25 to be paid at the door (for full day attendees)

https://www.greensborobar.org/wp-content/uploads/2019/02/GBA-Logo-2.png 0 0 Greensboro Bar Association https://www.greensborobar.org/wp-content/uploads/2019/02/GBA-Logo-2.png Greensboro Bar Association2019-09-23 16:48:582019-09-23 16:48:58Opioid Summit - 6 Hrs. CLE Credit
Join the Greensboro Bar Association and the Guilford County Association of Black Lawyers at our joint outing, attending the musical “Memphis” at Community Theatre of Greensboro.
Friday, September 20
Pre-show cocktail reception at The Studio at CTG (next to theater) at 6:30.
“Memphis” at 7:30.
From the underground dance clubs of 1950’s Memphis, Tennessee, comes the Tony and Olivier Award-winning musical that bursts off the stage with explosive dancing, irresistible songs and a thrilling tale of fame and forbidden love. Inspired by actual events,  “Memphis” looks at the American civil rights movement through the lens of the emergence of rock and roll onto the American cultural landscape.  The show revolves around a white radio DJ who wants to change the world and a black club singer who is ready for her big break. Come along on their incredible journey to the ends of the airwaves- filled with laughter, soaring emotion, and roof-raising rock ‘n’ roll.
Sponsored by Necessary Marketing, Eric Richardson Law, and the Campaign to Re-Elect Bill Davis.

The Human Race was a great success. Twenty two GBA members walked in the April 27th 5K event organized by the Volunteer Center of Greensboro. Many others donated which spurred us to raise over $2,100 for non-profits in Greensboro.

It is not too late to participate! You can still donate by logging onto thehumanrace5k.org. Thanks to the donors and all who participated in the race.

There had been rumblings about who would win the Second Annual Bar Association Trivia Battle. At the High Point Bar Association Meeting, they mentioned at every meeting how they would keep the trophy at home. Greensboro Bar Association members discussed preparations months in advance.

The winning team answered an entire category correctly. Our own Sharon Dunmore was able to assist her team in correctly distinguishing spells and charms from Harry Potter from obscure terms that have appeared in legal opinions over the years. Mutatis mutandis, anyone?

Members of the GBA and HPBA worked together to plan a location, to create a budget, and to bring everything together, including a host. Trivia topics included Expecto Patronus or Ex Post Facto; general knowledge; famous law school graduates; and Child’s Play.

From the platform where the host announced the questions, it was apparent that spirited discussions and debates were taking place. Laughter could be heard over drink orders and, often, over the trivia hostess. Even the staff at WiFi Wine Bar joined in. Jokes were made at the expense of those who didn’t attend – all in good fun, of course.

The trophy now resides in Greensboro, thanks to a group of young lawyers. More importantly, however, it was obvious that this event bridged gaps between groups – attorneys and judges, old and young, litigators and transactional attorneys, and GBA and HPBA.

Congratulations to Guilford County Public Defender Fred Lind, who was honored with the prestigious Caswell Award in recognition and appreciation for 45 or more years of dedicated, extended service to the State of North Carolina.

The ceremony was held Tuesday, April 2, at the North Carolina Museum of History in Raleigh and honored 21 employees across state agencies and branches. Lind became the assistant public defender in September 1974 and then Guilford County’s chief public defender in 2011.

Thank you for your service, Fred!

Reid L. Phillips has been selected to receive the 2019 Chief Justice I. Beverly Lake, Jr. Public Service Award at the NCBA Annual Meeting in Asheville.

His name was placed in nomination by the Past Presidents’ Council and approved unanimously by the NCBA Board of Governors at its spring meeting in Wrightsville Beach.

A graduate of the University of North Carolina at Chapel Hill (1974) and the University of Texas School of Law (1977), Phillips has practiced his entire career with Brooks Pierce, serving as managing partner since 2016.

He has provided leadership to the Community Foundation of Greater Greensboro and the LeBauer Park Steering Committee, and in 2015 served as chairman of the War Memorial Commission which oversees the Greensboro Coliseum Complex.

Thank you for your attention to this important matter. Should you have any questions or require assistance, please contact me directly at 336-378-0300.

Our holiday celebration will be held from 5:30-7:30 PM tomorrow, December 12 at Elon Law as planned.