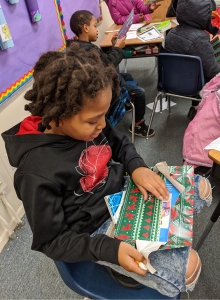 On December 15, 2020, GBA Elementary School Project Co-Chair Adam Kerr delivered a set of more than 200 well-wrapped books from the Greensboro Bar Association to David D. Jones Elementary School. Even though the pandemic meant that GBA members did not get to personally put the books in the hands of every K-5 student in the Traditional English program this year, we kept as much of our holiday tradition intact as possible. As in years past, GBA members generously donated more than $2,600, and the books were purchased through Jones’s Scholastic Book Fair, which provides the school with points that can be used to purchase new books for the school library and classrooms. Unlike in years past, we were not able to wrap the books together at the holiday party, but several volunteers stepped up and offered to wrap books at work or home, including:

Elizabeth A. Ray (and staff at Crumley Roberts, LLP)

Thanks go to everyone who donated their time and money to make this program successful! Sufficient funds were raised to purchase additional books as gifts for all fifth graders graduating from Jones Elementary this year in both the Traditional English and Spanish Immersion programs,
as well as to make a donation to the school’s Food Bank.

The GBA would like to thank the following individuals and groups for their generosity in donating funds to the annual Elementary School Project: