Tickets are now on sale to see Preet Bharara, a former U.S. Attorney for the Southern District of New York who prosecuted terrorists, drug cartels, arms traffickers, money launderers, insider traders, and corrupt public officials. He visits October 10 at 6:30 p.m. for a talk at the Carolina Theatre presented by The Joseph M. Bryan Foundation. Tickets are $15 each (plus tax).

Bharara is the latest addition to an Elon University line-up of speakers of international prominence invited to encourage and promote discussion and thought during the upcoming academic year on the theme of “Quest for Truth.” The Elon University Speaker Series is supported by The News & Observer, The Charlotte Observer, and
The Herald-Sun. 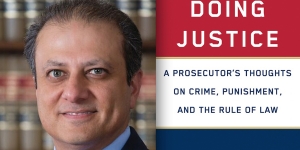 Nominated to the position by President Barack Obama, Bharara served as U.S. Attorney for the Southern District of New York from 2009 to 2017, earning a reputation as one of “the nation’s most aggressive and outspoken prosecutors,” according to The New York Times. On March 19, 2019, Bharara’s book “Doing Justice: A Prosecutor’s Thoughts on Crime, Punishment, and the Rule of Law” was published by Knopf and debuted at #4 on The New York Times bestseller list. It offers an overview of the American justice system, and why the rule of law is essential to society.